The Trick To Keeping Pavement Ants Off Your Portsmouth Property 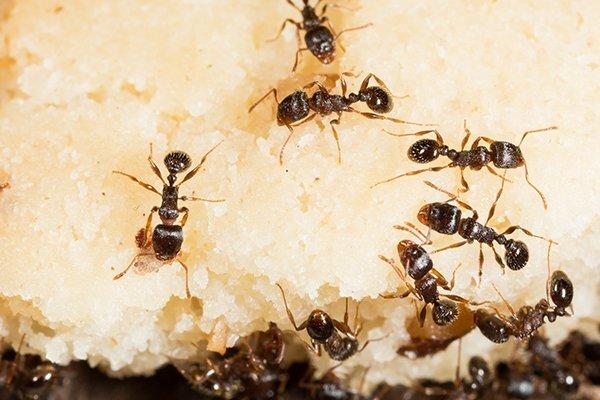 Most ants might not be all that hazardous to your health, but they’re still annoying invaders nobody wants. Here in Ohio, pavement ants are one of the most common intruders of homes and businesses alike. An invasive species imported from Europe, the pavement ant can outcompete many of its native counterparts, and it will also often invade your home in huge numbers. Let’s talk about what they’re attracted to and what to do about them

Pavement ants are small, dark brown or black ants between 1/10 to 1/6 of an inch long. They have two nodes between their thorax and abdomen and stiff hairs covering their entire body. There isn’t much about their looks to distinguish pavement ants from other ants, but if you get stung by one, you’ll know it.

Pavement ants, like fire ants, can sting. However, unlike fire ants, pavement ants are docile and prefer flight to fight. So if you come upon a pavement ant nest, you might walk away with a couple of stings, if you get stung at all, but you won’t be swarmed or pursued.

Even though they’re not aggressive or dangerous, pavement ants can still cause problems. For one thing, they can invade your home in massive numbers, crawling across your floors, counters, and appliances and causing aesthetic problems. For another, they’re not particularly picky eaters, so they might crawl right from your kitchen trash to your pantry, bringing all the garbage germs with them and contaminating your food stores in the process.

Pavement ants will eat just about anything – from meats to sweets to seeds to dead insects, and they like greasy foods in particular. Colonies will send out workers to scout for food and set up pheromone trails leading to the nest, so you might find a long line of pavement ants crawling across your counter if you leave dirty dishes or a plate of cookies sitting out.

How Can You Get Rid Of Pavement Ants?

Pavement ants are really tough to get rid of once they decide your house is a good spot for an easy meal. So it’s best to keep them out in the first place. The two main ways to do that are physically barring their entry and reducing the things that attract them.

Unfortunately, ants aren’t just pesky; they’re also pretty clever, meaning they might get around even your toughest prevention measures. If that happens, you’re going to need professional help. Here at Ohio Pest Control, we’ve been serving the Portsmouth area since 1967, meaning we’ve got decades of experience dealing with annoying ants. Our residential and commercial services cover a wide array of pests – including multiple ant species – to give you peace of mind your home is protected, no matter what kind of bug is bugging you. So give us a call at (740) 242-7805 at Ohio Pest Control or visit our contact page to schedule your inspection and service today!

Complete the form below to schedule your no obligation inspection.